“Hi, my name is Devina. I’ve grown up in Dubai and I’m here to find out more about the city I’ve lived in for nearly three decades.”

That almost sounds like I’m at a support meeting, and in a way, maybe that’s what it means to me. That quote is one of many variations of me introducing myself at the beginning of a Sufra excursion with Frying Pan Adventures. So far, I’ve found my favourite vada pav in Bur Dubai, learned more about the culture and importance of coffee in Emirati life, and explored the maze of Al Ras in Deira while gorging on Emirati breakfast foods.

So what is this ‘support group’? Well, I’d written about Frying Pan Adventures way back when, and since then I’ve gone on multiple tours with the company – whether it was me taking tourists on the tours, or residents on their last hurrah. But let’s be fair, it wasn’t something I was doing every month. But in the second half of 2018, that all changed, when the home-grown food tour company launched its Sufra / سُفْرة programme. The word ‘sufra’ is an Arabic one, which means a shared feast or a communal spread, and the ethos that created the Frying Pan Adventures concept is translated through here.

Every month, there’s about two or three experiences that go beyond the regular tours that Frying Pan offers (so that includes things like Little India on a Plate, Middle Eastern Food Pilgrimage and more) and allows people to travel deeper. It’s about embedding deeper into the community and interacting with residents, and essentially getting down and dirty into different cuisines. And you know what, some of them aren’t necessarily just about food; there is a healthy mixture of culture and cuisine, and in some the element of one will outweigh the other.

Here’s a quick round-up of some of the experiences I’ve had so far:

This walk was a total foodie’s paradise, through the alleys of bright and colourful Bur Dubai, where we poked our heads into five different stores selling vada pav – the Bombay burger, if you will. Think of a deep fried potato patty in the middle of two slices of pav (bread). If you’ve never had a vada pav before, you’ll say, so a basic potato fritter inside bread? OK LISTEN… that’s the most bland version. That potato fritter is made with mustard seeds, with some turmeric, usually with ginger and garlic – and sometimes with a good kick of chillies. I didn’t realise until then how deeply I cared about what chutneys are used and what’s inside the actual patty. Let me tell you: I CARED. 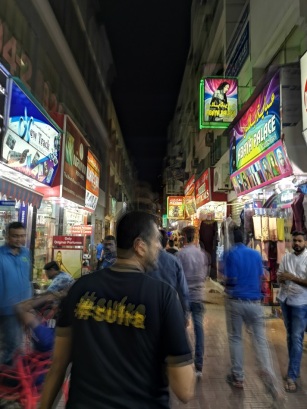 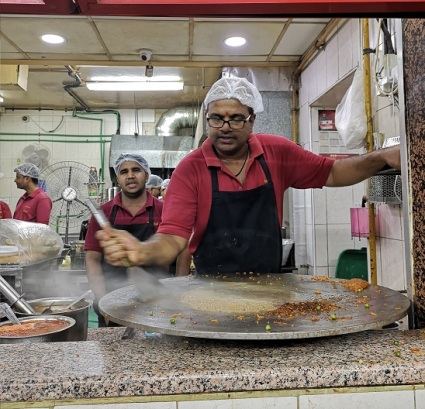 At one of the stops on the tour 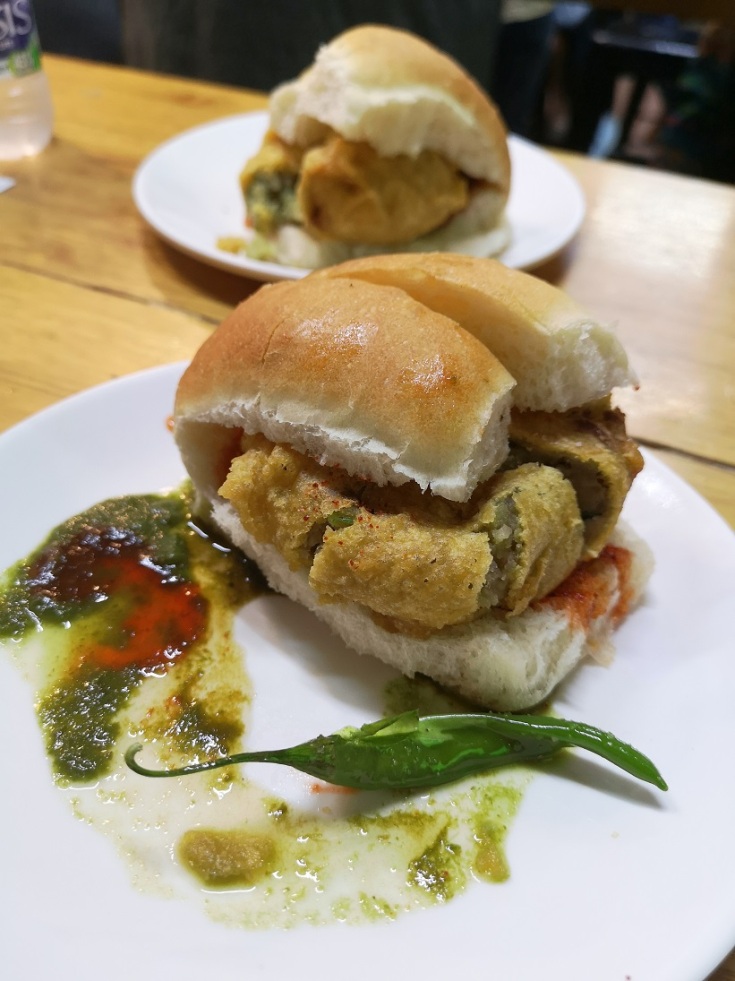 How much spice could I take? Did I want my vada pav slightly sweet in a nod to my half-Gujarati genes (yes I did)? What did I think about the pav? This was no time to *just* eat, for goodness’ sake. It was time to be opinionated!

History, culture, lights and stories made for a happy mash on this evening. And frankly, after this walk, I know where my favourite vada pav place is now. And that’s worth paying for!

I signed up for the day-trip to Al Ain to meet Madam Ghaya Al Dhaheri and learn all about gahwa (Arabic coffee) and its meaning in Emirati and Arab life. We headed off after an unexpected anda-parotta (egg’n’paratha) breakfast, with more unexpected surprises on the way. Instead of our original meeting spot with Madam Ghaya – we were headed for her home! A rare honour, and a well-received one! She fed us more breakfast: regag (think of crepes, usually eaten with eggs, a preserved fish sauce and sometimes cheese) and luqaimat (deep fried dumplings, made sweet with date syrup). And then we watched and listened as she showed us how a dallah (traditional coffee pot) of Arabic coffee is prepared in a traditional coffee ceremony. After listening to this eloquent storyteller, we headed out to eat madfoon (at a Yemeni restaurant which opened in the 80s – where the meat is buried with coals the way it is traditionally done in the desert), and then visited the Al Ain Oasis and were given amazing insights into the life of Emiratis in the past. 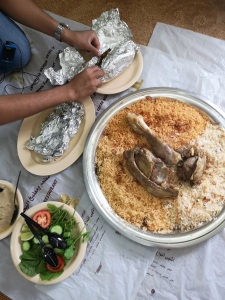 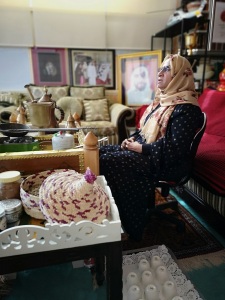 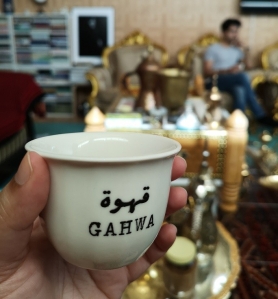 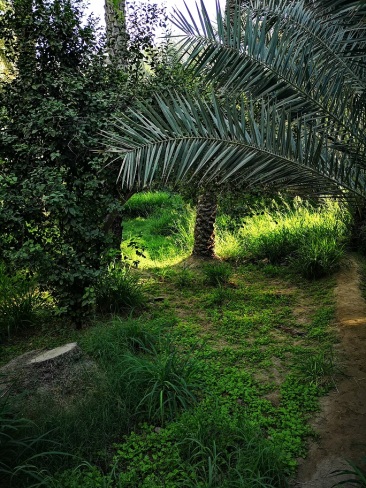 In the Al Ain Oasis 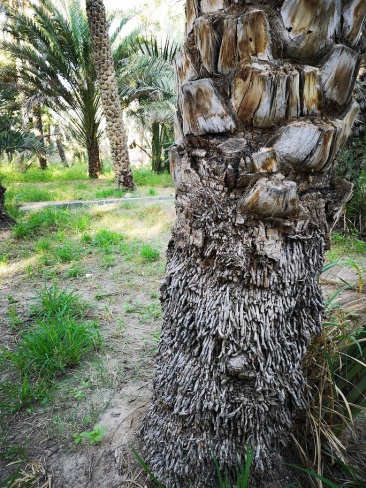 In the Al Ain Oasis

What I loved about this is that I hadn’t been to Al Ain for a few years, and certainly came away with oodles of knowledge and stories about Emirati life and culture I had never heard of before. Madam Ghaya’s generosity, especially with her time, was unparalleled. I genuinely could have listened to her for hours. I remember wondering whether I should go for the day-long event or not – and my decision was justified many times over.

A week after UAE National Day, I headed off to Al Ras for the final Sufra of the year. And promptly got lost trying to find the meeting point. In my own city! I was so embarrassed, you have no idea. But all embarrassment was forgotten (slowly) as we made our way through the maze of this neighbourhood. While I’d grown up in the city, Al Ras as a district was one I had hardly ever explored, so connecting with yet another part of this multi-cultural city was something I was super excited about.

This was one of those amazing Sufras where culture took pole position over the food, and I’m so pleased about it! We meandered through the streets to discover the oldest halwa (not to be mistaken with Indian halwa, this is the Arab fudge-like, gooey sweet) factory in Dubai, dove in to the spice souk and discovered museums I didn’t know existed, had breakfast at a majlis where I secretly pledged my heart to the dates and chaami (salted buttermilk cheese curds) combination, entered the Bait Al Banaat to learn more about women in the UAE’s history and culture and celebrated their anninverary (an unplanned diversion, isn’t that amazing!?), and ended with lunch at a “public restaurant” after briskly passing through the perfume souk. 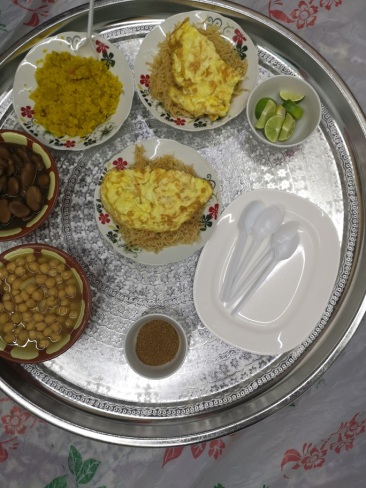 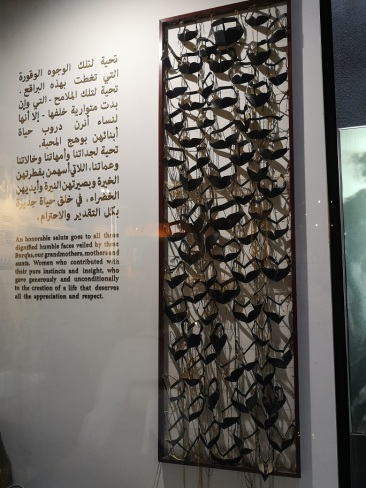 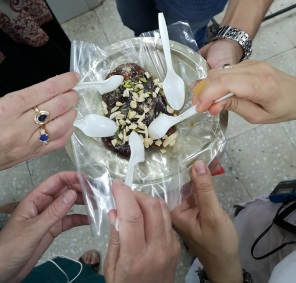 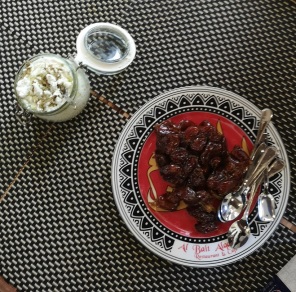 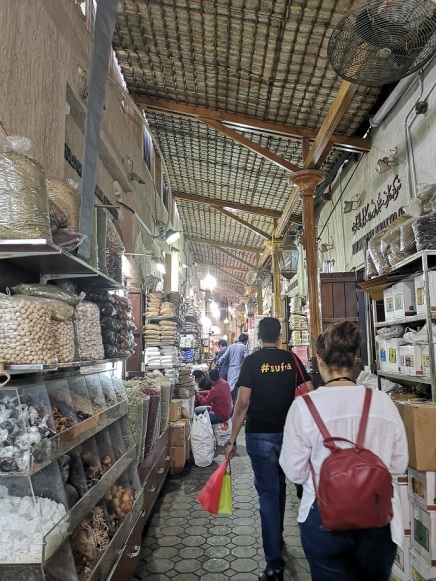 The knowledge and facts I learned – especially during an interactive part of the tour where we had to to read out factsheets about our various stops and essentially ‘guide’ the group – were those which not many people know or take the time to find out. Plus the bonus is all the amazing food we tried!

Well, for starters, if you want to see more photos I’ve taken from the Sufra experiences, head over to my Instagram profile and click on the “#Sufra” highlight – enjoy!

What I love about this is that it’s not just about food. It’s about learning, and gaining more knowledge about the city I live in, and grew up in. And it’s not about someone just talking at you either, rather, it’s about that communal spread of ideas and discussion. So much love for how it’s structured!

Navigating the streets of 'Old Dubai' with @fryingpanadventures #Sufra While I've grown up in #Dubai I have never really walked around this area before, so the final Sufra of the year was a great way to see more of that part of town. Have you gone on a tour with Frying Pan Adventures yet? 🙂 . 📷 Taken December 8, 2018 . #traveldeeper #UAE

And by the end of my third Sufra session, I’ve met very cool like-minded people from different parts of the world – not in the least our main tour guides, Nahla and Mufaddal (who are now aware of my chai obsession… keep ’em coming).

So, will I see you at the next Sufra experience – which by the way is called Shawarma Showdown (I am so opinionated about shawarma omg)? Let me know if you’ve been, if we’ve met, and what you think!

If you want to learn more about the Sufra programme, click here!

Here’s a lovely post by Sally Prosser from My Custard Pie about a Sufra night I wasn’t able to attend – have a read!

4 thoughts on “Experiencing Sufra with Frying Pan Adventures in Dubai”