Note: this post has been slowly marinating in the drafts section, waiting to see light of day, for two months. Yup, that’s how far behind my posts are. The memories might be sketchy, but my feelings for the place stay true.

I met Rohit three days before this food jaunt. As I said in the Kati Roll Company post (which was an outing AFTER this one; clearly my organizational skills on the space-time continuum front are wonky on this blog), he’d already proved himself to be foodie-knowledgeable…and this post tells you why.

It was a dark and rainy night. No really, it was. London is generally gloomy/foggy/rainy, but this time my trip to UK was blessed with sunshine. But clearly the weather decided to reign its real face this night. I’d hopped on a bus towards Chapel Market, a quirky little spot in Islington which hosts a market along with a line of intriguing eateries.

He had mentioned this awesome little place that was fashioned after a dhaba (a dhaba is the Hindi/Urdu word meant to represent a small, local restaurant, almost like a truck pitstop on highways) in Islington, and I was all for it. 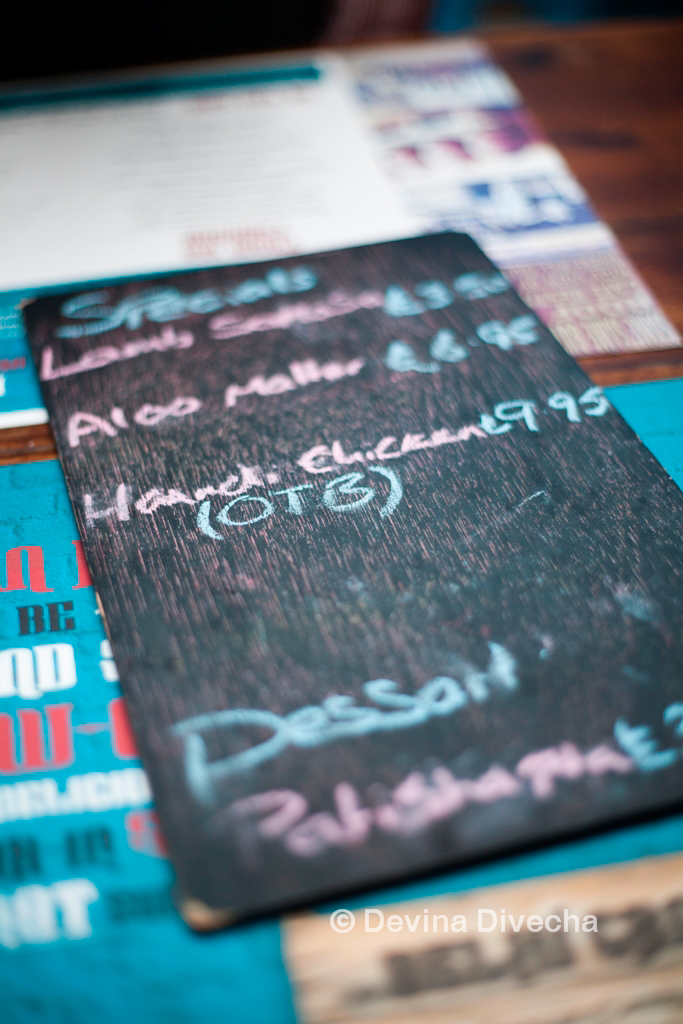 So I found myself running from the bus stop to the restaurant in the rain (I was bereft of an umbrella)…and he wasn’t there. I decided to wait out for a bit, but he was running late. So I walked in and sat for 10-15 minutes, looking like I’d been stood up. Then he sashayed in and all was forgiven at the thought of good food.

Rohit had really talked this place up, so expectations were high. It was also interesting to see he seemed to know everyone who worked there, which meant to me he’d been here many times before and would be adept at navigating around the menu. And so he was.

I must make a note here, a specific note…of their chutneys and dips. You must order this when you go there (and quite affordable at £1) A rack of five shotglasses filled to the brim with mouth-watering chutneys stare at you. “DIP INTO US!” they scream. Dip, I did. The beetroot one was magnificent I must say. 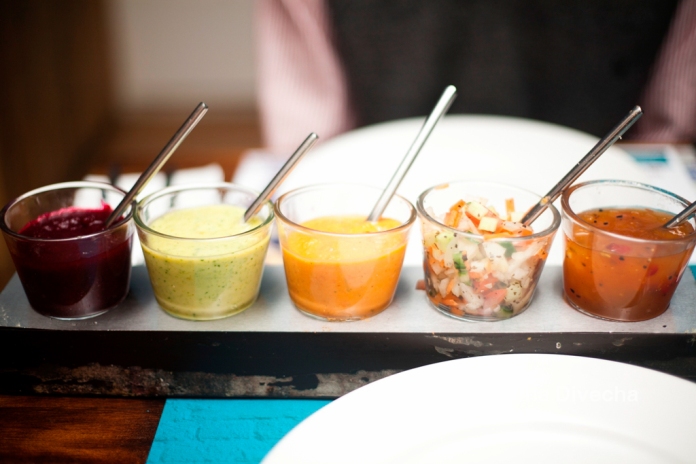 And then the food! The chicken tikka was average; I wasn’t spectacularly wowed. It was good but potentially not something I’d order again.

The rogan gosht was the star of the night though (okay, one of the stars…will come to the second star later). The spices it was cooked in were exploding in my mouth and the lamb was so, so, so tender. I’ve said it before and I’ll say it again: in the UK, the lamb/beef/mutton is so much more better than the chicken…no idea why. This dish was superb. My only regret? I felt the price was higher than the portion served…this dish is gold though. 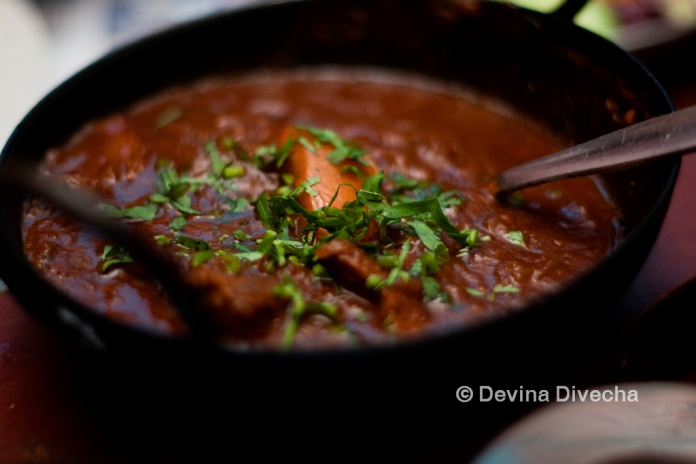 And second star? The rotis that we had to accompany our meal. I’m sorry, but ma ke haath ki roti (transliteration: rotis made by Mom’s hand) are the best, and I felt like my Mom had made these rotis. And Rohit was in agreement – the rotis were what foodies would call “authentic”. Wah!

Tarkha dal was another main; this was also very flavourful and when I was dipping my hot rotis into the dal and scooping it up quickly before the lentils dribbled down my hand, I felt…home.

A finish with a pistachio kulfi and we were done!

The interiors were interesting. I liked the colour scheme very much; the blue and browns made it earthy and home-y, which is in sync with the restaurant promoting itself as a dhaba. Although, if you were in India, no dhaba would be so well done! I believe they also erect a stand outside the restaurant during the day and sell wraps. Oh I wish I’d been able to check that out too! Next time…for there will be one.

Practical tips: Either get off at Angel tube station and walk it up, or take a bus towards Chapel Market.

This is their official website…take a look!