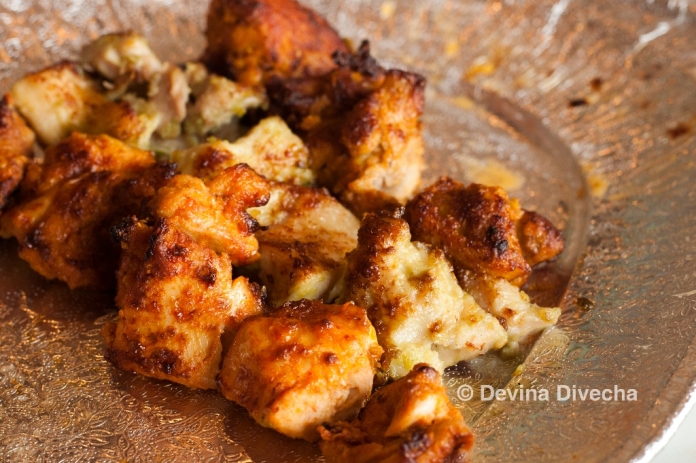 [2017 EDIT: I’ve been given to understand this restuarant is now closed]

Accepting invites to dine at restaurants has become a double-edged sword. It’s refreshing to see owners and PRs have realised the food blogging community is important and has its own following, but sometimes the obligation to blog, and not just blog, but give a positive review is ridiculous.

Another problem I have with these invites is the impersonal nature of it all. How many times have we received emails that go: “DEAR BLOGGER…”. Wow. How many bloggers did you send it out to?

Which is why when I saw an email inviting me to visit Kabab Kolony in Karama, I was pleasantly surprised. Not only did I get a personalised email, there was a scan of a headed letter from the owner, Hira Sohail, addressing me. It was probably the determining factor in me accepting the invite, in addition to the fact that I’d already seen a review of the restaurant on fellow Fooderati Nadia Masood’s blog, and had stuck this restaurant on my ever-growing “must-try” list.

Armed with the invite, and a fellow food explorer, John Bambridge (Who has no links attached to his name because he’s a social media avoider, the complete opposite of me), I drove with Guido (my car) towards Karama.

After I sit down and have a look around, I grin. 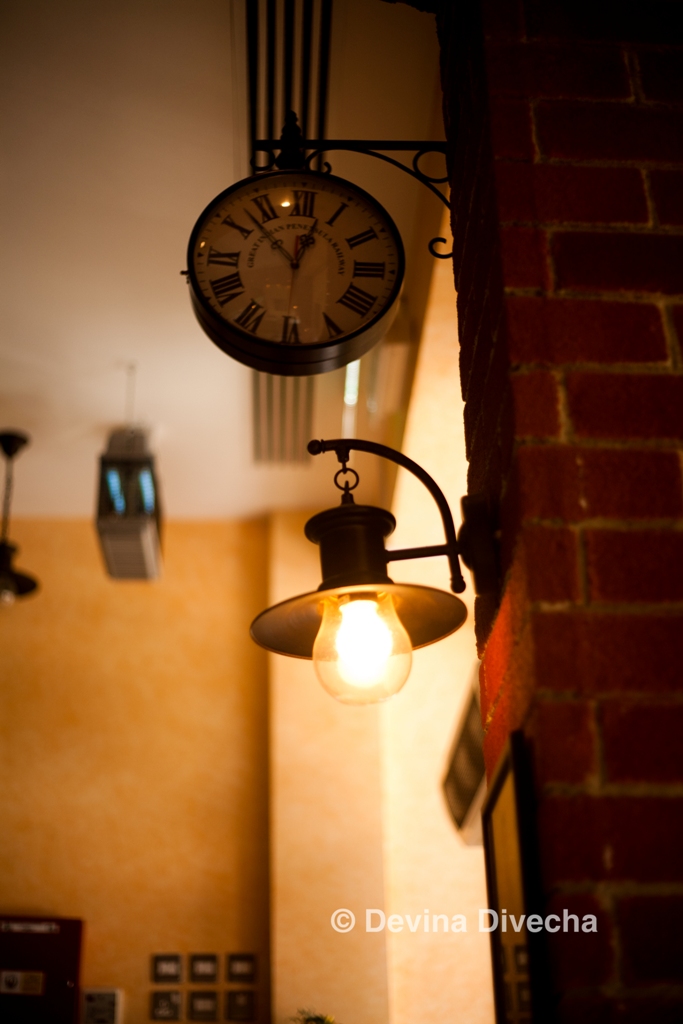 Red bricks, photo frames lining the staircase with Indian and Pakistani print ads from decades ago, cartoons with film stars spouting out praise for Kabab Kolony, an old clock reminiscent of railway stations… anyone from the subcontinent will be whipped into nostalgia.

We ordered the Dhoom drink (“nimboo pani [lemon juice] with a twist”), a mix grill and some chicken biryani. And then…we got more to sample.

First to arrive was Dhoom. I was a fan from the first sip – and tweeted immediately to that effect. 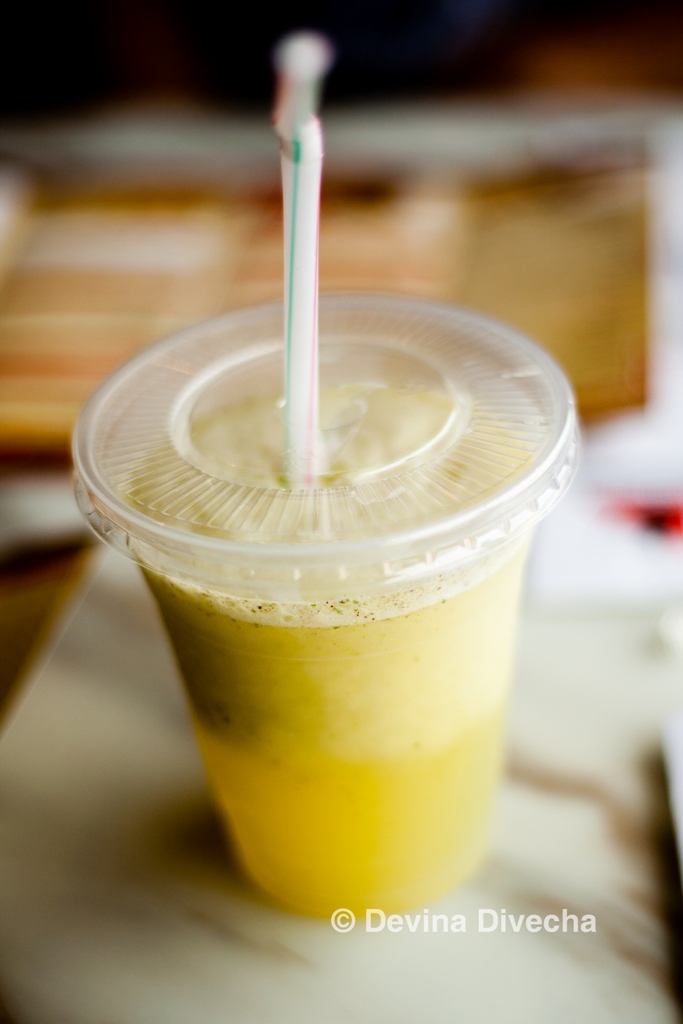 At @kababkolony in Karama. The Dhoom drink (nimbu pani with a kick) is SO GOOD.

I’m still not sure what added elements were mixed into the simple nimboo pani (lemon juice) but I loved every minute I spent drinking that magical concoction.

Then we were treated to the Qeema and Cheese paratha…piping hot and oozing with meat and cheese, we dipped this in the raita for full effect. 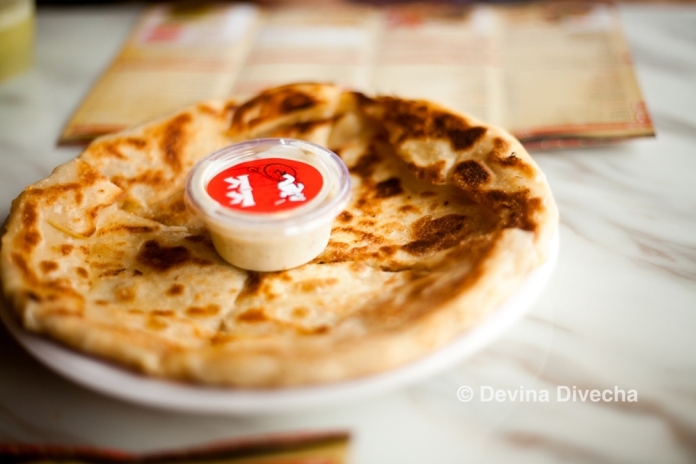 Arrival of the mix grill! Most impressive – for AED 30/- we had a pretty good selection there. Reshmi kababs, tikka botis, bihari botis, malai botis and veg seekh kababs. I didn’t realise the veg seekh kababs were … well… vegetarian until I got to the reshmi kabab and realised I’d scoffed down the veg one first. I was very happy with this selection, especially since the meats used in the dish were extremely tender and full of juices. Armed with that price, this one is highly recommended from me. 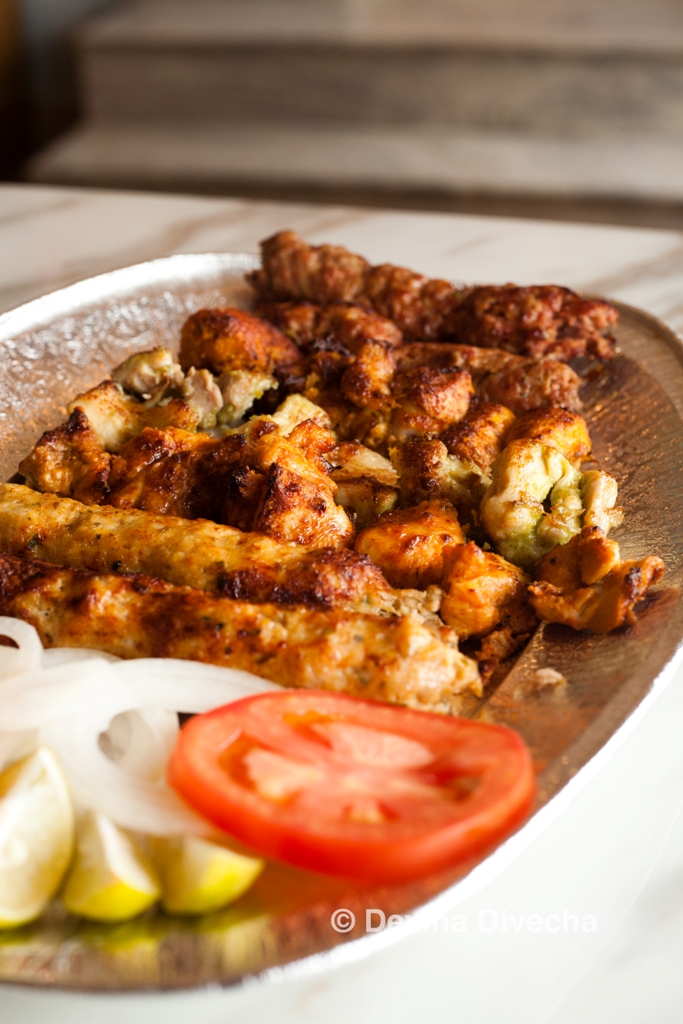 What next? Oh, we finished our Dhoom drinks by then, and were replenished with Dishoom (this one had pineapple and lemon in it). It was nice, but the Dhoom was waaayyy nicer.

Biryani was up next. I’d read about the awesomeness of the mutton biryani on Nadia’s blog, so perhaps I went in with very high expectations. The chicken biryani was not bad; I’d call it average.

Chapli bun kabab was also on offer. A meat patty nestled between two poufy bits of bread and slapped with an omelette on top, it’s a popular dish in the sub-continent. I liked this one quite a bit; again, the meat was very tender and therefore so much more yummier. 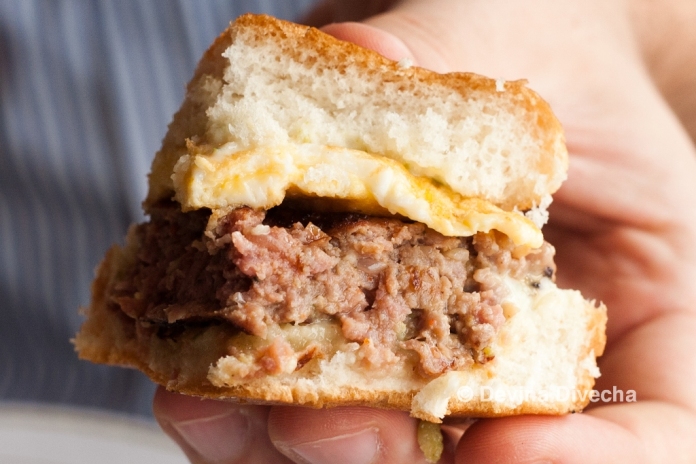 I tried the KK Chicken Dhamaka roll, which had bite-sized bits of chicken swimming in garlic mayo sauce. 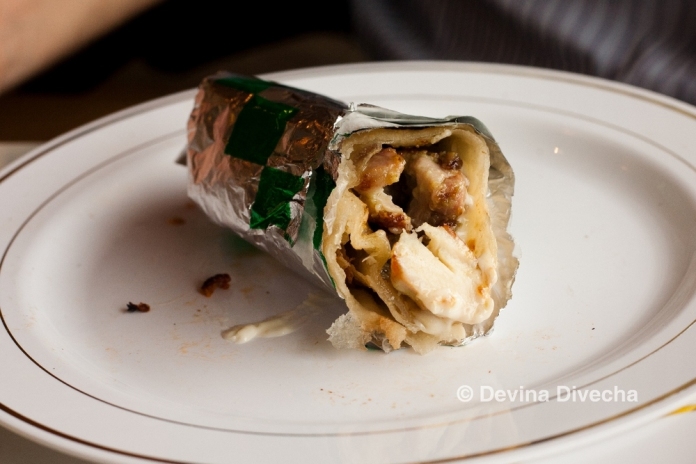 I took this opportunity to take a quick walk around the restaurant. Hira, the owner, had popped in earlier for a quick chat, and we took this time to speak a bit more. The restaurant has been open for a year now (I believe it’s celebrating its one-year anniversary on July 23) and has since seen a steady stream of customers pass through its doors. She explained the restaurant serves its food on plastic styrofoam cutlery to tap into that sub-continental fast food vibe, where everything is on the go. 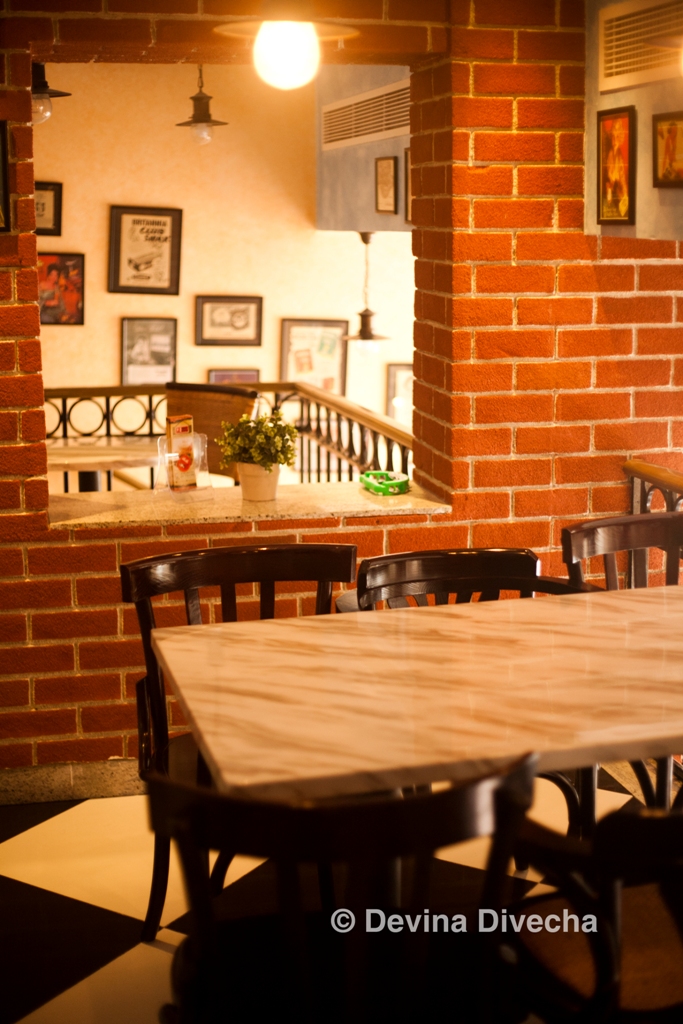 Hira’s idea behind the restaurant was to appeal to the sub-continental community, with no boundaries on whether it would be termed a Pakistani restaurant or an Indian restaurant. She mentions the interiors and how the aim was to create an ambience that connected with anyone from those countries. Music from decades ago played constantly; as I hummed and jiggled at my table, I remembered playing antakshari with my family as a child.

Shout out to my Mom: see all those video cassettes in this picture? There was Dhoop Kinare among those too! 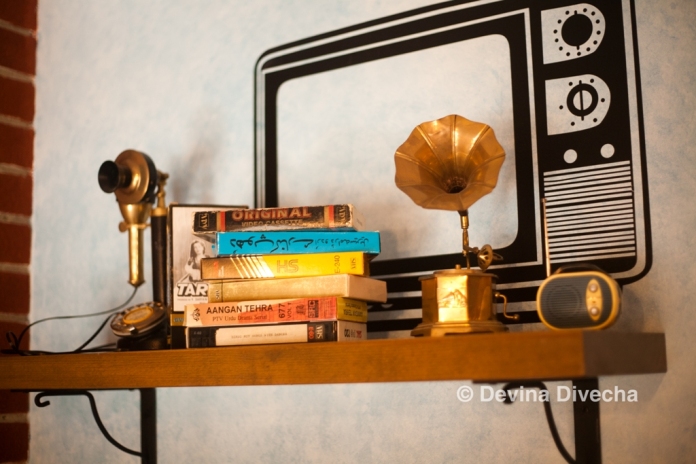 Then we returned to our table… because the food wasn’t over! We tried the gajrela, a quirky mix of gajar ka halwa and kheer. I really, really, really loved this one. I wish I’d had more place in my already stuffed tummy to have more that day, but John more than made up for my tummy’s reticence.

Oh but let me wax eloquent now about the Kashmiri chai. Now, before Kabab Kolony, I’d tried Kashmiri chai a grand total of two times. Neither of which I liked it. Once was at Global Village 2012, and the next at a Dubai-based tea place.

Hira didn’t seem daunted by my claim of not liking Kashmiri chai. She placed two cups of steaming chai in front of us, and I tasted. And tasted again. Whadya know, I liked it! Hira told me such an interesting story about the chai. It’s made from tea leaves, milk and baking soda, with pistachios sprinkled on top for added flavour. The actual method of preparing it is complicated, and takes two hours for one batch – which has caused the restaurant to sometimes run out of it because of the demand. When the first batch was prepared, she didn’t like it…and found an expert in Kashmiri chai in Sharjah who trained her staff in the right way of preparing it. And voila, that’s how I ended up with this masterpiece.

As I left the restaurant, sated and stuffed, we both agreed we’d had a good meal. There were definitely some dishes I preferred over the others, but the restaurant has a menu that will appeal to different tastes and spice levels (nothing was spicy at all).

Kabab Kolony does what it says on the tin: it provides you with street-style fast food, that will keep you full for quite some time.

To see more pictures from the restaurant, pop over to the Facebook album. 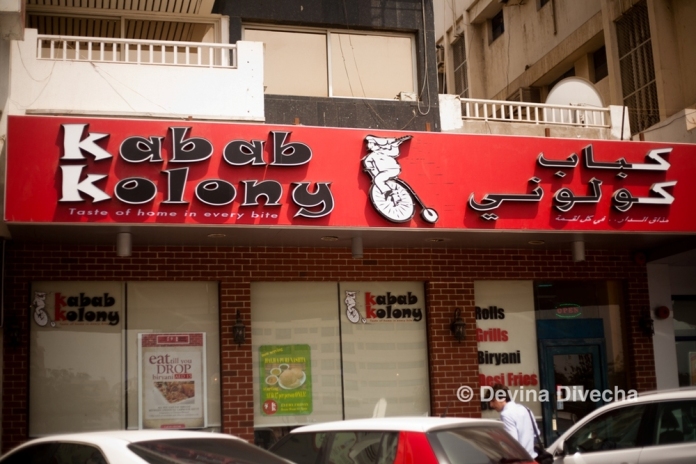 Disclaimer: I was a guest of Hira Sohail, managing director of Kabab Kolony.

Practical tips: There’s paid parking right in front of the restaurant, or if you don’t find parking there, try to find your way to the parallel road inside Sheikh Hamdan Colony and park there. The Karama metro station is the closest if you fancy taking public transport. Have the Kashmiri Chai if it’s available – I promise you will love it.

9 thoughts on “A hearty lunch at Kabab Kolony”