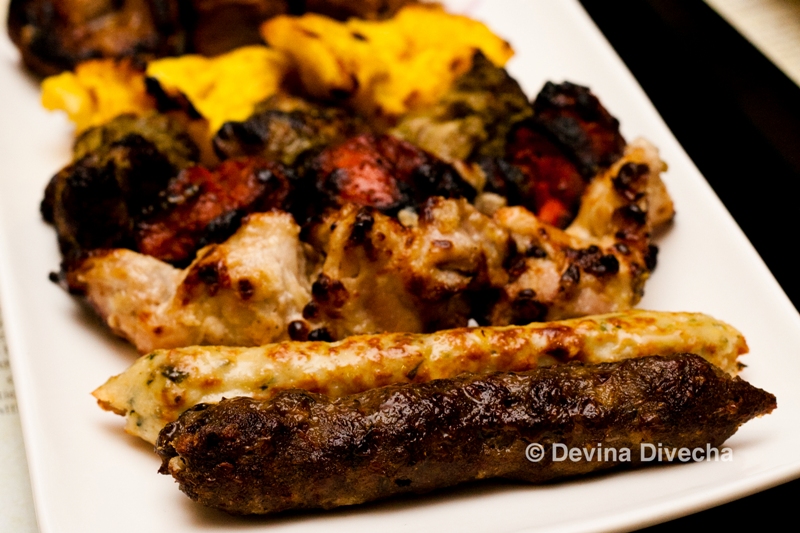 “THEY HAVE UGALI?!” exclaimed my friend.

I had no idea what ugali was, and decided not to look it up before I went there. All I knew from the takeaway menu I was holding, was that the dish came from Kenya. Each item on the menu had little flags next to its name, to denote where it came from. Three flags were scattered across – India, Kenya, and Britain. Intrigued by the mix, one evening I found myself making my way to Flames Grill & Curry in JLT.

The paper placemats on the table give the story behind the restaurant – of Indian immigrants in Kenya who eventually moved to England. Of how the food from three continents merged to form Flames. Of how the owner, Tom Gohil, made his way to Dubai. The restaurant, which has been open for over a month now, is looked after by him and his wife. The Gohil home recipes are what make the menu – and here’s a quick peek at what we ate. 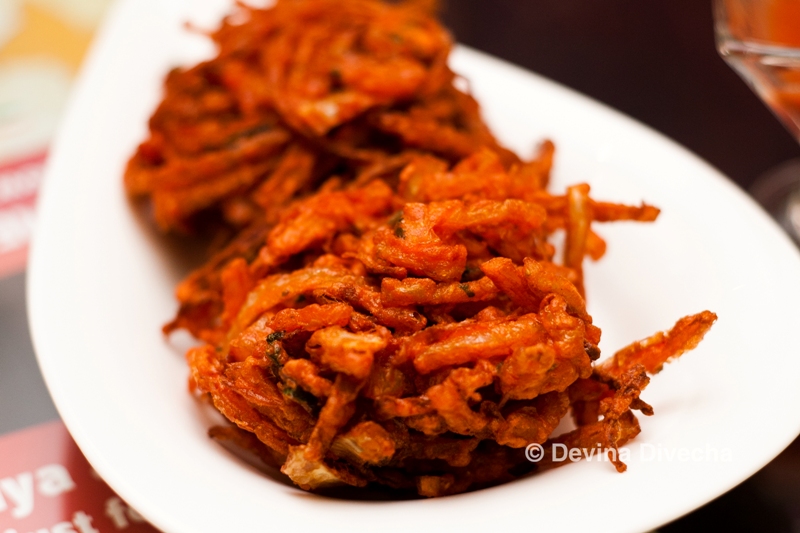 We ordered the onion bhaji as a starter. My dining partner-in-crime had, for the last month, ordered similar items in Indian restaurants and come away disappointed. When this onion bhaji (labelled British on the menu) arrived at our table, I think he nearly wept with joy. These, he proclaimed, are the real British onion bhaji. He then proceeded to tell the waiter and the owner later on that he had been craving these ever since he came to the UAE and never found them. His quest was over. So… it was good then? Stories of quests aside, I had never had anything like this before in Indian restaurants, so the Brit take on onion bhaji was refreshing and new for me. I loved it – crispy and filled with flavour without being overpowering, these starters packed a mighty punch. 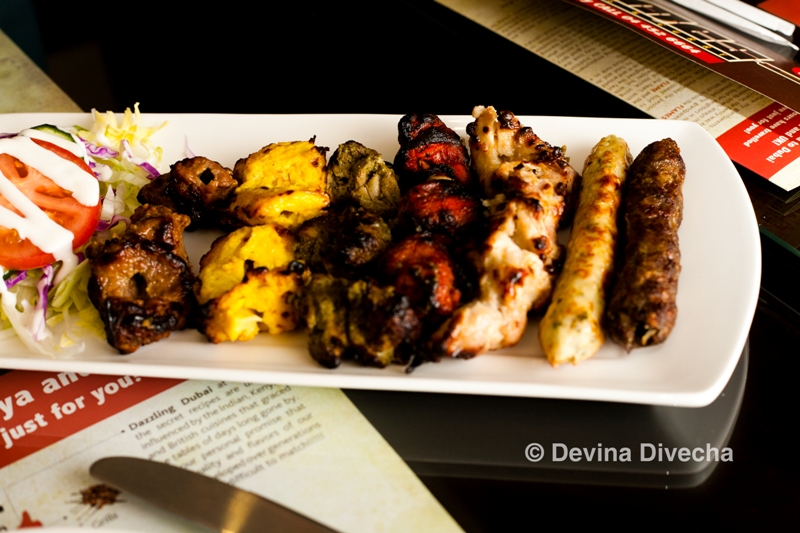 Then we picked the mixed grill (non veg for us natch) – which had a mixture of kababs from the menu. This was a great choice, I thought, since it gave us a comprehensive idea of the different dishes on the list. I enjoyed picking my way through the tender meat and fish in front of us. 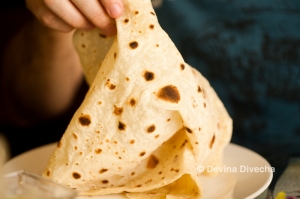 There was the chicken and mutton seekh kabab, chicken malai kabab, kastoori chicken kabab, lasooni fish tikka, chicken tikka, and…a mutton one whose name I cannot remember (sorry!). Each had its distinct flavour – and every one of them made me a fan, and wanting more. We ate these paired with the roomali roti (it’s not necessary to eat these kababs with a roti; they’re good enough on their own). The leftover roti from the kabab devouring came in handy though when we ran out of ugali with our chicken curry. But now I’m getting ahead of myself. What is ugali? Read on!

We opted to ugali with the chicken curry, on recommendation from our waiter. Ugali is found in Kenya and Tanzania, and is a starchy dish made from maize flour. Indians will probably find it easy to eat curries with the ugali. 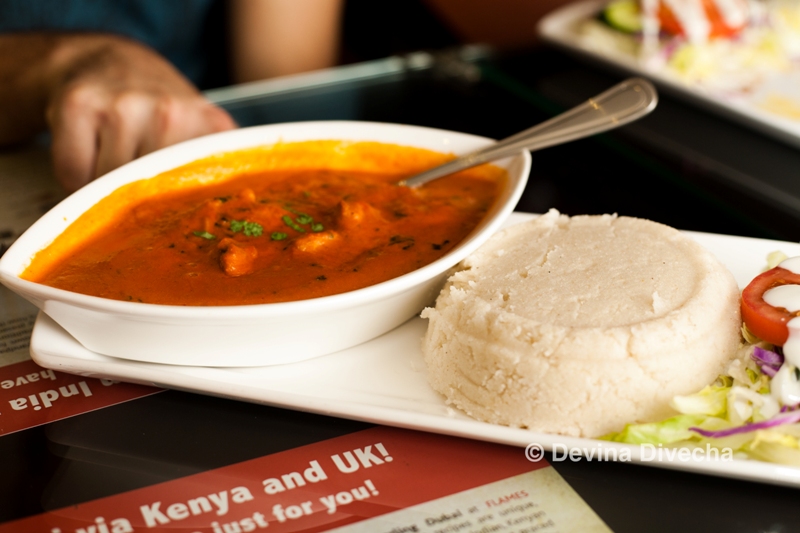 While my companion was kind enough to show me how to eat with it (because he’s eaten it before) for a photo gallery below, here’s a step-by-step guide:

I LOVED IT. The chicken curry was simple, but in its simplicity was what you’d want to fill your tummy. It was hearty, filling, yet so, so basic. That is its specialty. There were no frills, there was no pretending to make a ‘twist’ on the food. Authentic food right there. Nuff said. 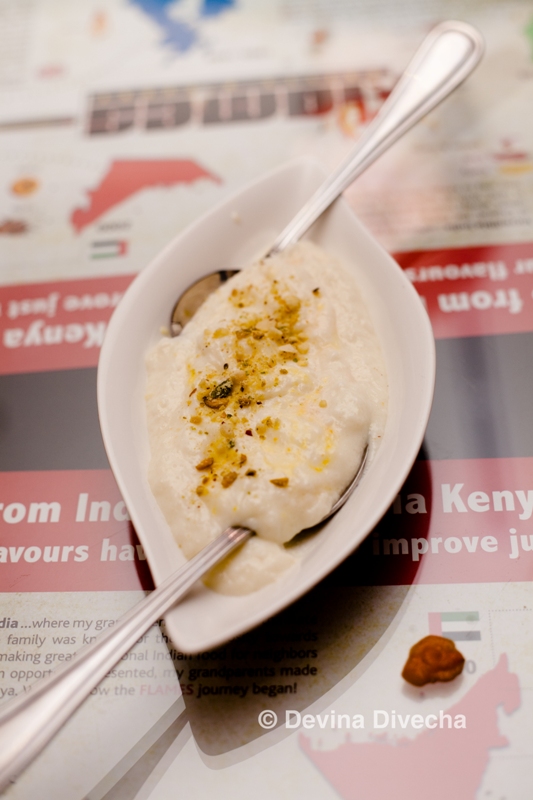 Tom Gohil, the owner, came around to ask us how we liked the food and during our conversation, we realised both him and his wife take a hands-on role to the restaurant.

It’s great to see start-up restaurants popping up, with people – real people, not corporations – trying to inject their special flavours into Dubai. I’ve been seeing this with increasing regularity lately, and this is another restaurant that gets the formula right.

The service was great btw – our server (I’m hoping his name was Bernard since that what it says on my receipt!), who was from Kenya, was great with giving us recommendations on what to eat. The type of service we get at restaurants really makes a difference, and this just added to the overall success of our meal at Flames. Great stuff.

So will I go back? Yes, yes, yes. The food and service was great, the prices are reasonable, and I want to explore more of the culinary delights on that menu. Why wouldn’t anyone go back to Flames?

Practical tips: Take the metro, hands down. Thank me later. Head over to Cluster D, and head to Lake Terrace Tower. It’s not on the lake level, but on the ground floor of the building (but overlooking the lake side). 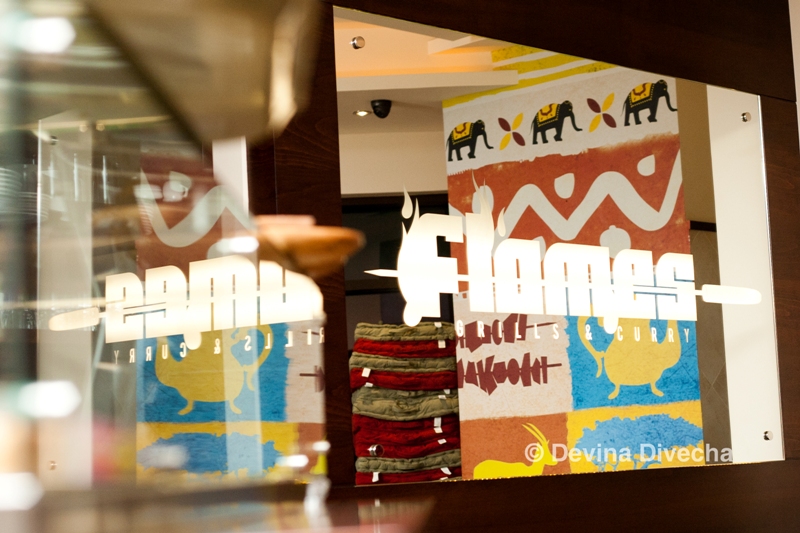