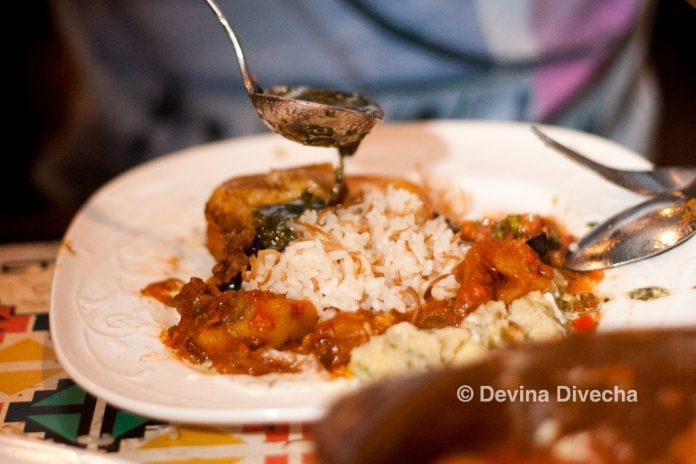 Molokheya with rice and fried chicken

“Do you want to go to the best Egyptian restaurant in town?” asked John ‘Foodie’ Bambridge, mysteriously.

I didn’t bite. Surely all restaurants claim they’re the best, and his question was based on a one-line review he found on the internet. The internet. Untrustworthy little thing.

He changed tactics: “Do you want to go to a restaurant, that’s never been reviewed? Ever? By any other food blog, or any publication?”

I fell…hook, line and sinker. 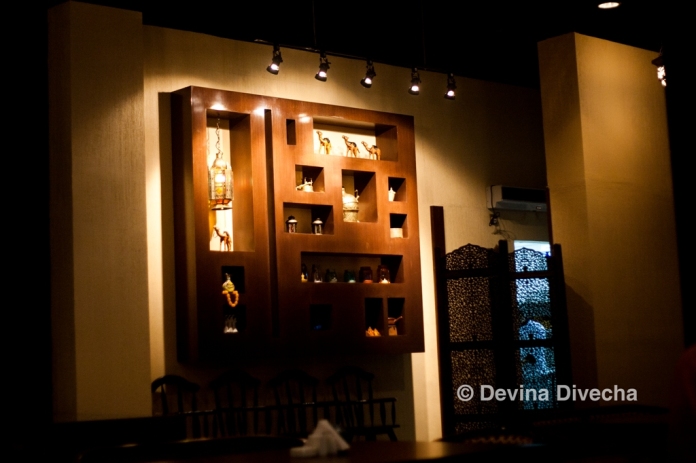 Interior of the restaurant

In a few days, we found ourselves outside Hadoota Masreya (حدوتة مصرية) … I looked up the translation, and it says: “Egyptian Story”. Anyway, we entered the café and found a large open space, with an assortment of tables and chairs all around. In one corner, two men were smoking sheesha, which initially made me hesitate, mostly because I can’t handle smoke very well. However, I must say, it didn’t bother us at all during the night. John commented on how it was probably because of the ventilation being so good and I must agree.

Interior of the restaurant

Now…on to the food. We ordered fresh mango juice and sugarcane juice to start with – both of which were good. The mango was very fresh, and was recommended to us by the waiter who told us they got in a fresh batch of mango just that very day.

For starters, fried eggplant, yoghurt salad and the Egyptian Tameya (which was their falafels). The waiter misunderstood though and got us a potato salad as well, which we didn’t have the heart to send back (just in case it got wasted), so we had more starters than we bargained for! 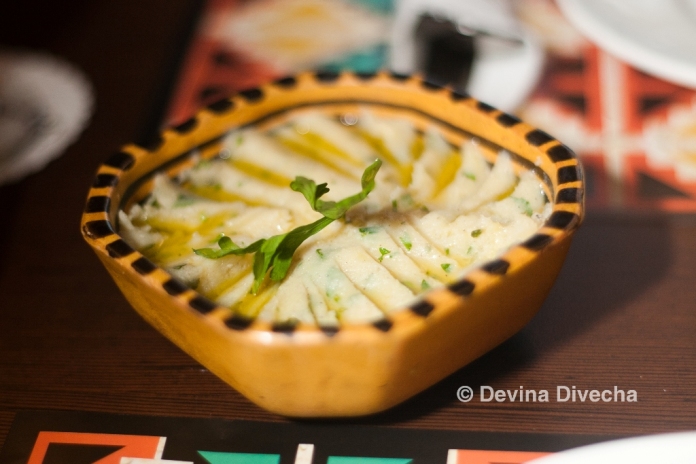 The mistake was a good one though – I enjoyed the creaminess and texture of the potato salad, which can be scooped up easily and eaten on its own. 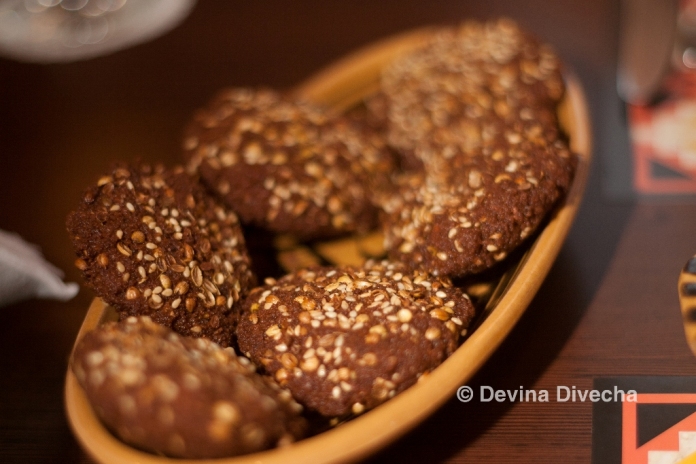 I insisted on ordering the falafels (remember my falafel trek?) and oh my goodness, I am so glad I did. Potentially one of the best falafels I’ve had in a while, the Egyptian Tameya had this crispy, juicy exterior that crackled as we bit through. And then inside – warm, soft, and full of herby flavours. I was wowed and when I go back, I will have their falafels again.

John’s verdict: “Falafels were so good! Crispy on the outside and gooey on the inside.” 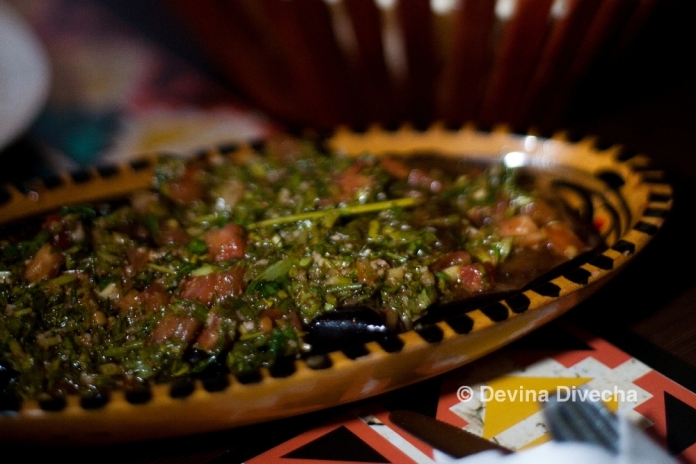 It’s become a rite now – every time we go a restaurant, if there is an aubergine/eggplant/brinjal dish on the menu, John will order it. So our token aubergine dish is this fried eggplant drowning in herbs and other vegetables. It was nice enough, but it didn’t stand out for me. John was surprised that the taste of the aubergine wasn’t “in your face”. 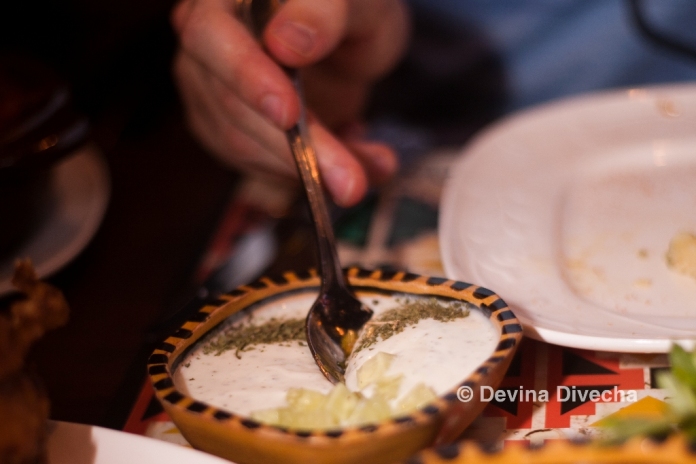 The yoghurt dip was very minty and felt fairly refreshing. It was light, and fairly good to keep dipping the falafels in it!

Did I already tell you I loved the falafel? OMG it was so good…I need to go back for my falafel fix.

When it came to the mains, we first ordered chicken molokheya. The waiter (whose name was Sayed btw and extremely helpful he was!), brought this massive dish over a fire and placed it on the side. And in front of us was the rice, with a fried chicken. The big dish had the molokheya slowly simmering in it. 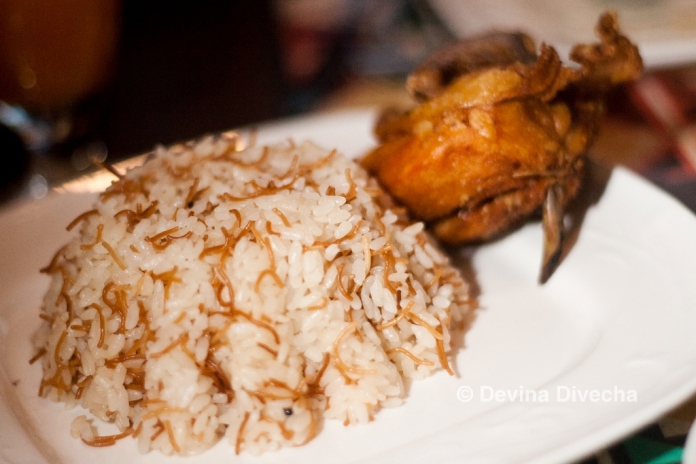 We just heaped the rice, chicken and molokheya together in one big mixture and ate. I enjoyed it – btw the flavour was very mild. I personally would have loved a bit more spice in the dish, but then that’s just me.

John’s verdict on this one: “It was more watery than I imagined. I thought it might be slimy [because the internet said so] but it was more like a dressing. It didn’t have a particularly distinctive taste, but it was nice with the chicken.”

There was another main we ordered – the tagen batatas – which we imagined meant a tagine with potatoes. Hearty, thick and filling, it was a gloopy dish with potatoes, meat and vegetables. The meat was tender and doused in tomato.

John’s verdict: “I liked the stew when it was cold! I wasn’t expecting it to be so tomato-ey. In contrast with everything else that we had, it was surprisingly un-herbed.”

Anyway, at this point John goes: “Let’s order another dish!” which I quickly labeled as the worst idea EVER – we were so stuffed at this point, the tagen batatas dish had yet to be devoured. Why on earth would we order more, I ask?

John said: “It’s for your food blog! For the good of your readers! The more we eat and review, the better it is for everyone!”

I fell…hook, line and sinker (and packed the tagen batatas dish for lunch the next day).

The result of that was this mixed grill. The meat was good,; it was average – I think there are a lot of Egyptian specialties on that menu that warrant being tried over this one.

John more or less agreed: “The mixed grill wasn’t that special. But no complaints. Compared with the portion sizes of the rest of the dishes we had, it wasn’t huge.” 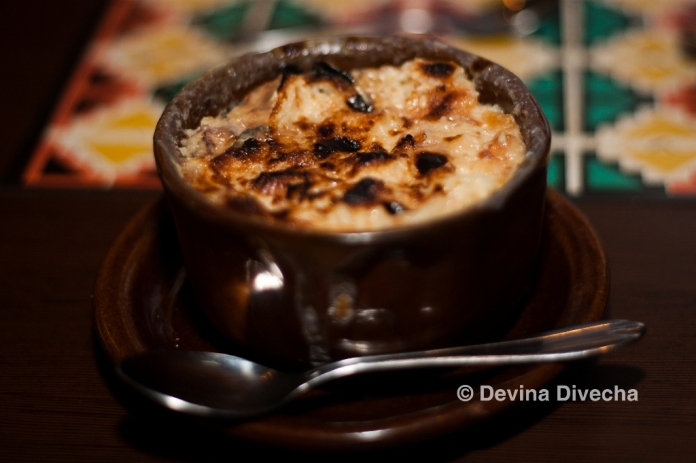 Along with John’s aubergine rule, he has a similar Umm Ali rule. So we found ourselves staring at a pot of hot Umm Ali. It seemed to have coconut shavings on the top and I wasn’t sure I liked the effect it was having, and it was so sweet, it was just overwhelming.

John said: “I personally liked the coconut. The main problem is that it was too sweet.”

John then said: “I’m going to order Sahlab. GOOGLE IT ON YOUR INTERNET DEVICE!” pointing to my phone. I googled it. I found it’s a drink made from the flour of dried tubers of a specific orchid. Sprinkled with chocolate on the top, I had a quick sip, and found it to be an interesting and yummy drink for sure.

He loved it: “Quite yummy. I was really stuffed and I had room to have that sahlab… it’s good enough that I could keep eating it when I couldn’t have the umm ali.”

And with that…we *finally* called for the bill (ummm … okay maybe we had mint tea before that!). Considering we ate enough for three or four people, I wasn’t surprised at the total. Prices were extremely reasonable for the portion sizes, which were generous.

John found this restaurant because it was among the restaurants listed as having offers for Emirates NBD cardholders, but the restaurant wouldn’t accept the debit card saying the offer was valid only for credit card holders. Either the bank’s website isn’t very clear, or the restaurant wasn’t sure of the deal it’s meant to be offering.

I think we had a fun experience. All the food was well-presented – the star of the night for me was definitely the falafels. Enjoyed the molokheya and tagen. Appetisers were also interesting. I’ll try one of their other desserts the next time!

And then when we were leaving we were told that the area we were sitting in opened only a month or so back, but the next side had been open for nearly a year. What other side? When we walked out…we saw that we’d walked straight into the café and sheesha area of the establishment – on the next side was a formal-looking restaurant.

When we entered earlier that evening, it was quiet and slightly empty. But when we left (well after 10.30pm), it was filled to the brim and buzzing on the new café side. On the restaurant side, things looked quiet. Same food – just a different setting depending on what you’re looking for.

I think I’d go back to try some other items on the menu…and for those gorgeous falafels. Because for them, I fell…hook, line and sinker.

Practical tips: If driving on SZR, take the Safa exit, then at the traffic lights, take a U-turn, take the exit to SZR south, then the first right into the service lane. You’ll see Hadoota Masreya there. Loads of parking available. Waiters are very knowledgeable, ask them for suggestions and recommendations. For more information, check out Hadoota Masreya on Facebook.